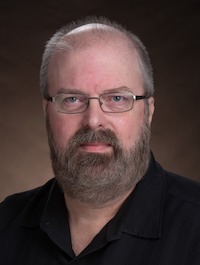 Seth C. Rasmussen of North Dakota State University is the recipient of the 2018 Paul R. Jones Outstanding Paper Award for “Cuprene: A Historical Curiosity Along the Path to Polyacetylene,” Vol. 42, No. 1 (2017), 63-78.

Seth’s time at the University of Oregon allowed him to develop his interests in the history of chemistry, including its incorporation in his teaching. He joined the HIST division in 2000 and was soon giving papers at meetings. His first paper presented to HIST was in 2004 at the Anaheim ACS Meeting: “Advances in 13th Century Glass Manufacturing and Its effect on Chemical Progress.” Seth’s interest in glass remains strong and he has become a recognized expert in the history of glass. He is also an authority on the use of history in the teaching of chemistry and gave his first talk on this topic in 2004 at the 18th Biennial Conference on Chemical Education. Seth has become a prolific presence at HIST meetings ever since his first presentations.

Seth’s first paper to appear in the Bulletin for the History of Chemistry was the written form of the talk he gave in 2004: Vol. 33, No. 1, 28-34 (2008). He has since written 9 more papers for the Bulletin and qualifies as the most prolific of all such authors in the 21st century.

The honored paper concerns the product of the polymerization of acetylene under various conditions. It is an exhaustive chronicle of the many attempts to both synthesize and characterize the products of this reaction. The moniker “cuprene” was acquired when copper or copper oxide were used as a catalyst under high temperature conditions in a reaction tube. The paper contains a fascinating figure of the final product that was chosen as the cover figure for Volume 42 Number 1. The colored product was a highly crosslinked hydrocarbon sheet. Once the original polymer was initiated, the temperatures were sufficient to promote further reactions with newly activated acetylene. In addition to the demanding historical research necessary for this topic, Seth has added his modern knowledge of the chemistry of polymerization. He compares the result to polyethylene which can be prepared in a ”low density” form that is highly branched due to further reactions of the system after initiation of the reaction. The complexity of the product is the result of both the characteristics of acetylene and the detailed trajectory of the reaction. This is modern history of chemistry at its best!

Seth has served the HIST Division with distinction since 2008, when he became the Program Chair. His term, until 2017, was characterized by a high level of organization, a great broadening of both the number and scope of the papers, and an example of inter-Division cooperation. One of his greatest achievements was the establishment of the Springer Briefs in the History of Chemistry Series, of which he is the Editor. It has resulted in a great increase in both the number and quality of books published in America on the History of Chemistry. He is currently the Chair of the HIST Division.