The Winner of the 2022 ECIS-Substantia Award is:

from the Hebrew University of Jerusalem - Isreal, with the oral presentation:

Abstract: Deep eutectic solvents (DESs) are unique solvents composed of at least two organic components
that are usually solid at room temperature, which upon mixing form a liquid with remarkable
solvation capabilities. Although DESs and their applications for industrial use have spurred
considerable interest, very little is known about their molecular mechanism of solvation.
Here we focus on reline, the DES formed from choline chloride and urea, and resolve the
mechanism through which its constituents solubilize β-cyclodextrin, over an order of magnitude
more than water. Combining experiments and simulations, we determined that β-cyclodextrin
solubility increases by a unique synergism between both urea and choline chloride. We further
show that β-cyclodextrin solubility grows remarkably when choline chloride is replaced by other
salts, and that the attained solubility is much higher than expected from the summed urea-salt
effect. Finally, we show how β-cyclodextrin solvated in reline maintains its supramolecular
complexation capability with a guest dye molecule even in the complete absence of water. By
resolving how multiple solutes act together to mediate both solubility and supramolecular
assembly, we provide guiding principles to design future solvents that are tailored for specific
needs.

On 18 Dec 2017, ECIS and the Department of Chemistry of the University of Florence agreed upon the creation of the ECIS-Substantia Award for a Young Scientist to acknowledge the top level scientific activity of young researchers in the field of colloid and interface science.

The prize is awarded annually. The award, consisting in € 500,00, is offered by Substantia. An International Journal of the History of Chemistry.

Applicants must possess a M.Sc degree and must have been actively engaged in scientific research for a period of time shorter than the PhD plus 1 year.

The applicants will declare their intention to compete for the award along with the submission of the abstract of their contribution to the annual meeting of ECIS.
The decision will be taken during the annual meeting by a special Jury nominated by the Chair of the Conference, and comprising: 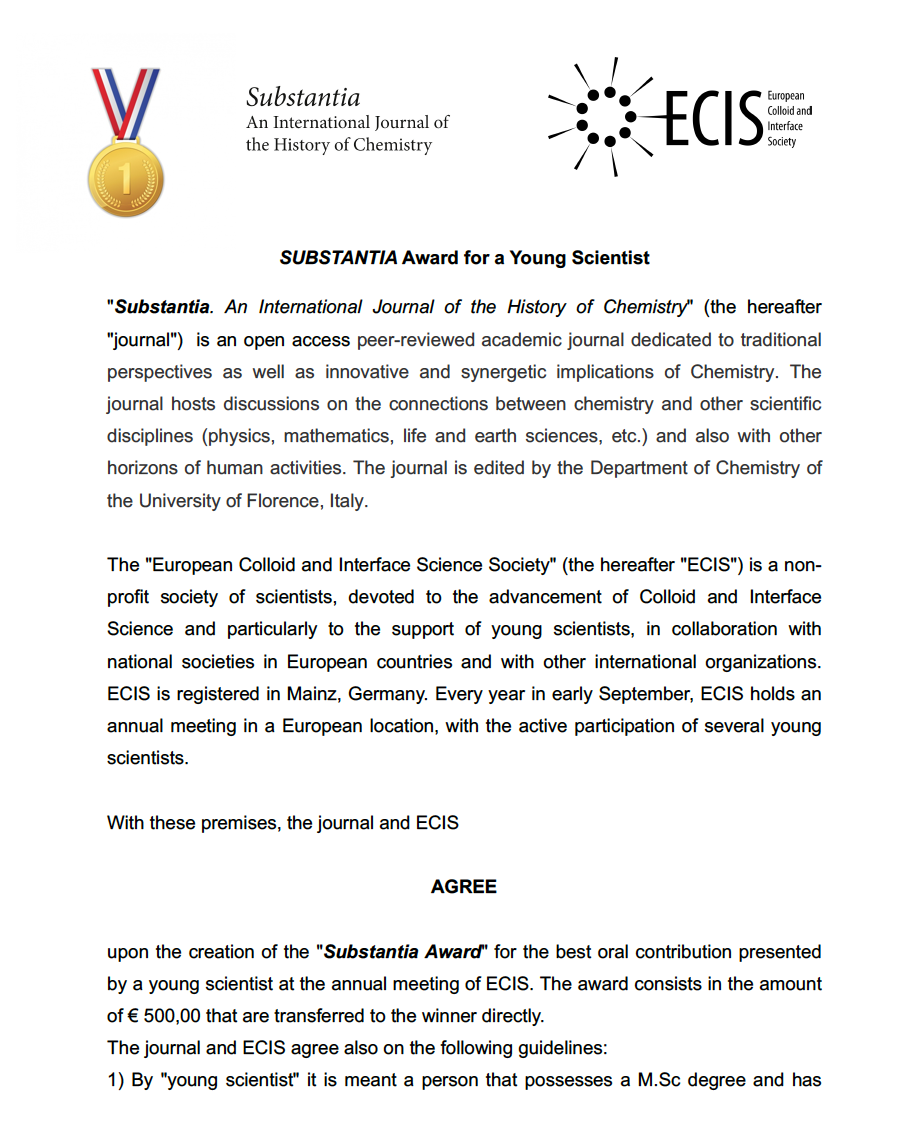