One face. No race

Greeks and Italians look pretty similar. They have similar habits. Landscapes, fragrances and food are almost identical. There is a popular expression that reflects this peculiar opinion. In English it sounds like "One face. One race".

Apart from being a funny and well-matched expression, it implies the existence of a race for humans.

In the occasion of the 80th anniversary of the promulgation of the fascist Racial Laws in Italy on 17 November 1938, that paved the way to the most atrocious abomination perpetrated against innocent people, we do reaffirm that a human race does not exist at all. Genetics and science in general cannot be abused to justify this repugnant lie.1

In the present time rumors, fears, hatred and resentment against other people reappear at all latitudes. And some add fuel to the flames.

We do not want to fall again and again in the same situation as 80 years ago.

We all have one face. And there is no race. 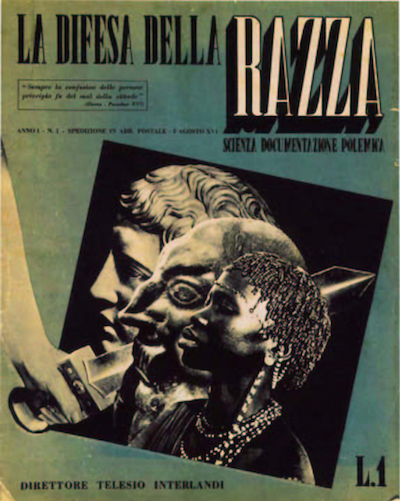 Cover page of the journal "Difesa della razza" (The defense of the race).