The authenticity of the false

From 1976 to 2016 researcher at National Research Council (CNR): Centre for Chemical Therodynamics at High Temperature and Institute for Nanomaterials Study, associated with the CNR-Institute for the Conservation and Valorization of Cultural Heritage

The scientific and professional interest during the forty years of activity is very articulate, having developed and created interests and scientific programs started from basic research to work alongside problems of technological interest in the field of both new and historical materials. In this context, numerous studies have been made of precious archaeological finds, these last considered as an expression of the technologies and scientific knowledge of a specific Culture. In particular, she studied welding and modifications of the metal as a result of thermal processes, starting from the characterization of surfaces of ancient artifacts, which show signs of metal processing, such as microstructural changes, mergers and any other elements required to fully track the type of artifact. The high specificity of this research activity produced diversified results in different sectors: teaching courses at the University, collaboration with Superintendents, Conservators and museum bodies as well as technical expertise, evidenced by the summary of the activities carried out. The frequent interactions with research groups in the United States, Russia and Jordan have been the occasion to produce innovative research programs within European and Mediterranean funding programmes, reaching important results. The peculiarity of acquired skills, together with chemical and physical elements of diagnostic tools, was applied to areas such as teaching or research activities in archaeometry, specifically on diagnostics of materials in bulk or surface. This last competence allows her to be included as consultant and cooperator in National and European projects in the field of archeology and forensic science. She is author of about 300 publications in scientific journals and contributions in books and catalogs as well as participation in more than 100 International Congresses. In 2008 she published the book "Welding in Etruscan Jewelry", Kappa Editions. 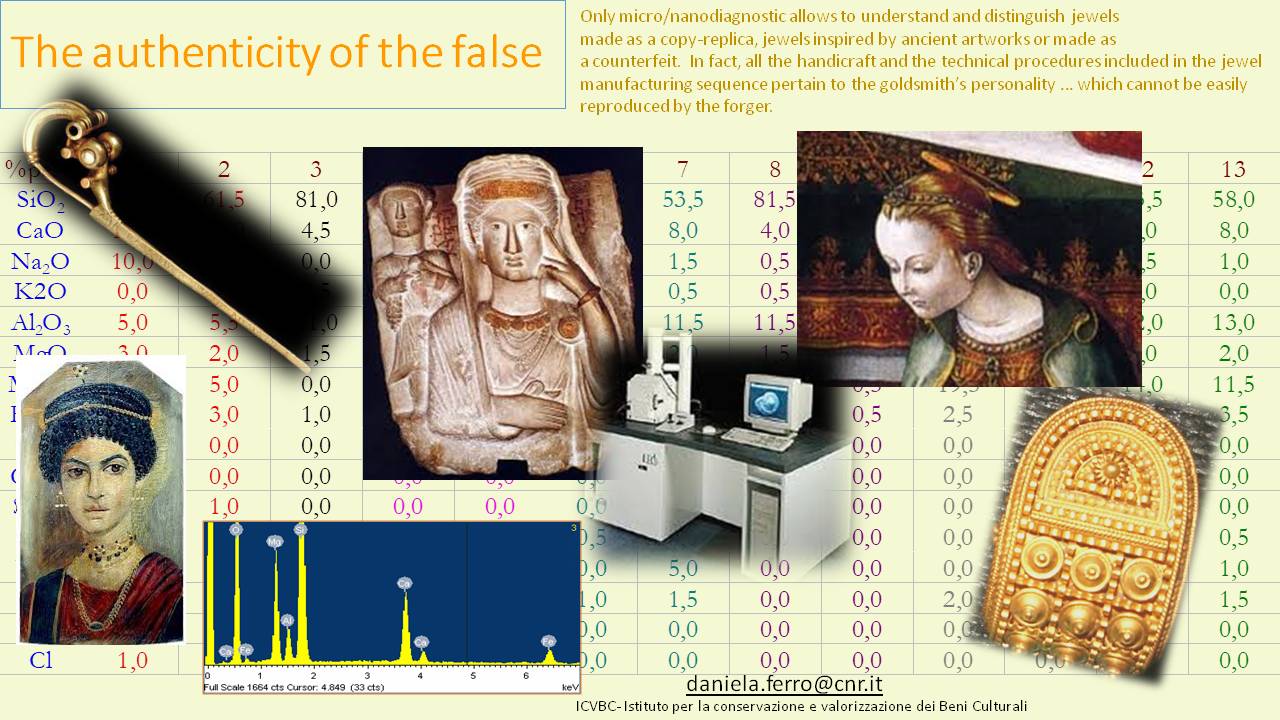 Since its first appearance, the jewel is not a mere expression of vanity and seduction, but it is associated with the decorative function with a multitude of meanings that transform it to all effects into a complex and fascinating communication code [1]. The jewel is a perfect combination of nature, technique and individual creativity that interprets the collective sensibility in the various eras. If we then join up it to its being made of precious metals, it becomes the most advantageous and profitable object of forgery [2]. The fakes and counterfeiters began at much the same time and flourished ever since. Most of the early productions are not very convincing, either stylistically or technically, this was due to a general lack of detailed stylistic information and an almost total ignorance of ancient technology. Until the middle of the last century there was no real science applied to the study of cultural heritage and the falsification or counterfeiting could be unmasked only by stylistic errors or anachronistic details detectable by visual observation although with the help of optical microscopes. With the establishment of Archaeometry, each diagnostic application became a real scientific research [3]. In the present work, the chemical and physical studies on ancient goldsmith’s art in the last forty years, highlight the peculiarity of the manufacturing technique and the scientific knowledge of the artisan, which allows not only to discover modern copies, falsifications or counterfeits, but also to unveil the modern experimental approaches implemented for a faithful reproduction of an ancient jewel.