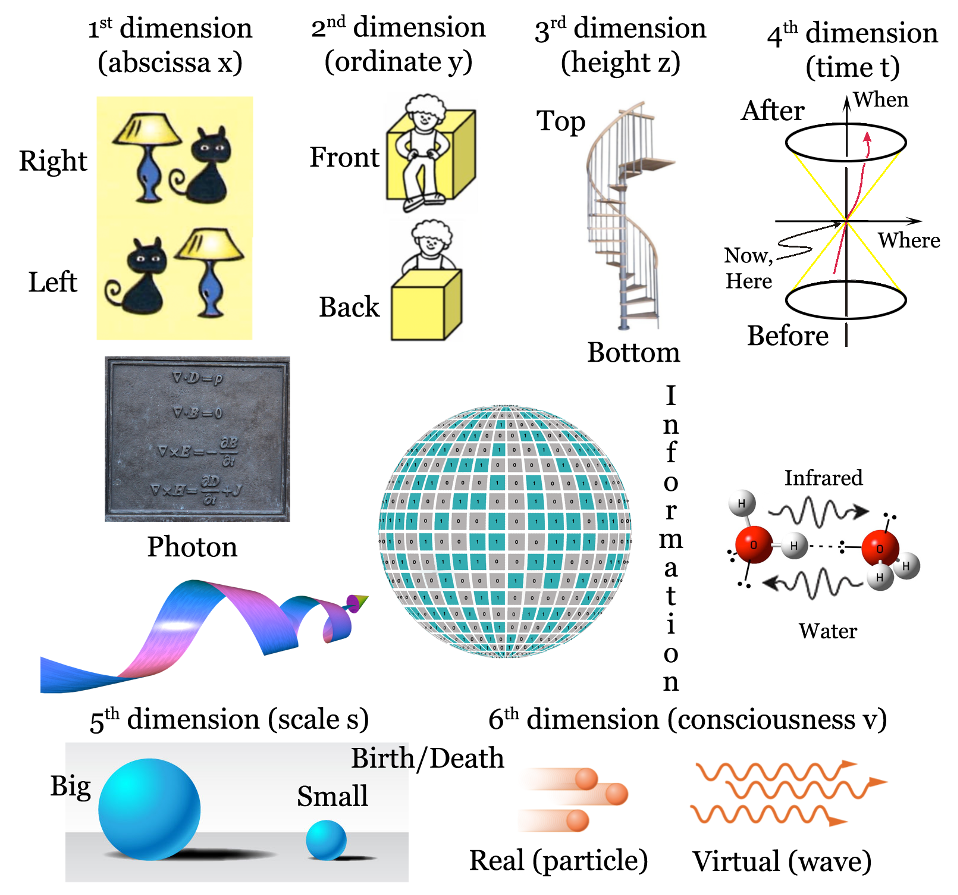 There are very few things that modern science does not yet understand. One of them is consciousness; the other is water. Our main idea was then that if consciousness and water are still deep mysteries for science, may be it could be because these apparently two different problems are in fact deeply entangled. Shading light on one of them may thus well have the wanted effect of illuminating the other. Here we explore the idea that it exists a mirror relationship between an immaterial pair acting on an immaterial world formed by consciousness and information on the one hand and a pair acting on a material world formed by electromagnetic radiations and water on the other hand. By using group theoretical arguments applied to the famous Maxwell’s equations, it is formally deduced that the external visible world les not a 4D space-time continuum (named M4 hereafter), but rather a 5D-space-time-scale hyper-surface (named C5 hereafter) embedded in the 6D-continuum of consciousness (named V6 hereafter) identified with the vacuum state of quantum physics or the ether (dynamical background) of general relativity. The new fifth degree of freedom in C5 is associated to the ability of living things to grow from small sizes to large sizes by leaving invariant its identity at all scales. The sixth degree of freedom in V6 is associated to the possibility of living either as a virtual non-observable entity or as a non-virtual observable entity. In both cases, life is associated to the ability of managing information stored in the intrinsic quantum structure of the V6-ether or in the water shells surrounding any living cell in the C5-hypersurface. Memory capacities and associated bandwidths may be quantitatively evaluated directly from theory and compared to what is observed experimentally giving confidence in the proposed approach. It follows directly from the modeling that space, time and mass should be considered as creations of consciousness in the form of persistent bits field, bringing strong support to eastern ways of philosophical thinking based were Tao or Vacuity are the only non-dual realities. For western minds, the modeling has the great advantage of explaining clearly what is life and consciousness in a mathematical frame unifying physics, chemistry and biology.